This walk will cover approximately 1.5 miles and will give you a brief introduction to the Town Centre of Droitwich Spa. The trail begins outside St Richards House in Victoria Square. 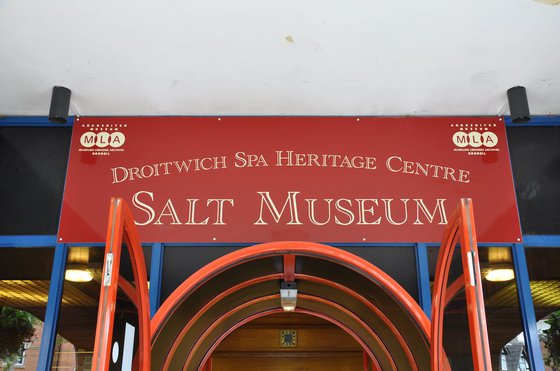 The building is now home to Droitwich Spa Heritage and Information which houses the Salt Museum and Droitwich Calling permanent exhibitions. St Richards House is the frontage of the old St Andrews Brine Baths, which closed in 1974.

Cross the Road and walk down St Andrews Road.

On the right you will see a red brick building. The redbrick building is now home to flats. This is the site of the Worcestershire Hotel, the original building by John Corbett opened in 1891 and represented the height of Victorian luxury for visitors staying to take the ‘cure’ at the brine baths. Some features of the Worcestershire Hotel have been incorporated into the new building, notably the original bell tower.

Walk to the Worcester Road Junction and turn left. The Lido Park is on the opposite side of the road.

This park was originally designed for the pleasure of visitors to the town and entrance cost one old penny. The park is home to The Lido Pool, which measures 40 metres long by 20 metres wide. Brine is added to the pool water to make it the same density as sea water. The lido is open during the summer season.

Note the angle of the buildings along the High Street. They lean at very peculiar angles owing to subsidence. The cause of this is the extraction of brine from beneath them.

Continue down the High Street to Tower Hill between shop numbers eight and ten on your left.

Retrace your steps and continue down the High Street until you reach Gurneys Lane on the right.

On your right are the remains of one of the last remaining pumping stations in Droitwich Spa.

Here you will see the Droitwich Canal. The Droitwich Barge Canal was built between Droitwich and the River Severn, designed by James Brindley and opened 18 March 1771. In 1852 a canal between Droitwich Spa and Hanbury Wharf came into operation. Boats first used this in 1854 to bring coal to Droitwich Spa and carry salt out. These boats were known as Tows or Wich barges and four of them are known to have operated from Droitwich Basin until World War I. Trade declined over the years as during the 1920s little use was being made of them. The canal was finally abandoned in 1939 and was re-opened after much work in 2011.

Continue straight ahead to just before the bridge and stand where you have a clear view of St Augustine church on Dodderhill. 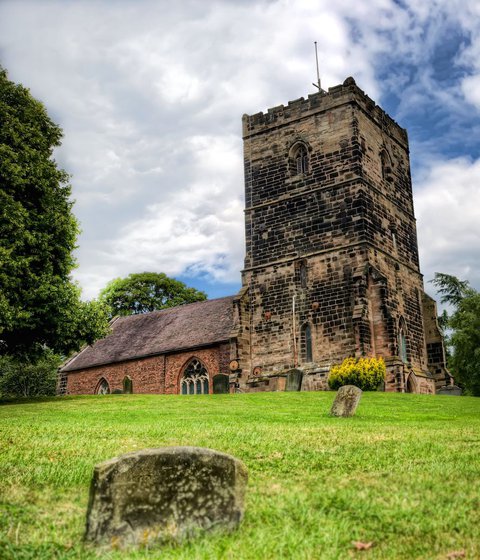 Above you is Dodderhill where a Roman fort was once situated. This church was theparish church of Dodderhill, Elmbridge and Wychbold. The name Dodderhill probably derives from the plant, Lesser Dodder, found on some Worcestershire hills in the past. The church today consists of a large 14th century chancel with north and south transepts. The nave was destroyed in the 17th century. Roundhead soldiers were billeted in St Augustines church, a high point from which to send cannon balls into Royalist Droitwich. In 1646 Charles soldiers stormed the church and set fire to it. The discolouration of the stonework was caused by years of sooty smoke rising from the salt making factories at the foot of Dodderhill. Long ago, salt workers houses were situated all along the banks of the canal; many still remain today.

Turn right and continue along the path for a short distance, keeping the River Salwarpe on your left.

If you look across the river, you will see a plaque marking the only remaining surface spring for the brine today.

Retrace your steps and from the bridge take the path directly opposite, walking past the Volunteer Barge on your left.

At the end of this path is the Upwich Brine Pit located directly next to the canal. This originates from medieval times as a source of the brine and was rebuilt in 1264 as integral to the salt making industry.

Turn right and then cross the canal at the next bridge you come to. Cross the Main Road at the safe refuge crossing point (see map) and continue across the car park until you enter Friar Street.

Directly in front of you, you will see Norbury House. Norbury House was originally the home of Captain Norbury, a naval officer who fought alongside Admiral Benbow in the West Indies. A memorial of him can be found in St Andrews Church. The present building was erected in 1936 as a hotel. During the Second World War, the building was requisitioned by the War Office and used for billeting troops. The building has now been converted into flats and the Norbury Theatre was incorporated in 1962, furnished with 173 seats purchased from the Old Theatre Royal in Worcester.

From here turn right and continue to the end of Friar Street. 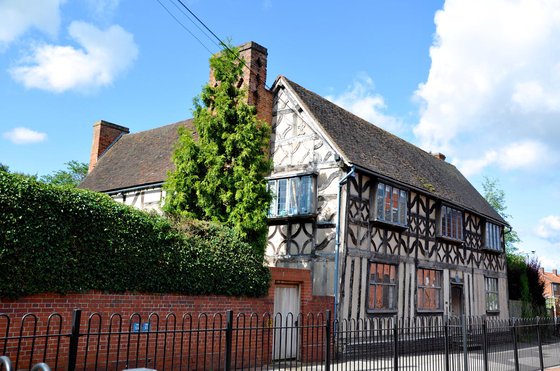 At the far end of Friar Street on the left is Priory House, an Elizabethan house with a Queen Anne Chimney which has been beautifully restored. The building is brown and buff rather than black and white; some experts believe that oak timbers are best preserved by natural weathering. Legend has it that Priory House is haunted by a revengeful ghost.

Retrace your steps towards Norbury House and the High Street.

On the left is the Old Cock Inn, which has a curious frontage for a Public House because it incorporates windows from the first St Nicholas’ Church. The Old Cock is the reputed venue of one of Judge Jefferies’ infamous Assizes, at which the Monmouth rebels of 1685 were sentenced. One of the two carvings on the wall is said to represent the hated judge, in which he has a frog coming out of his mouth. The inn gained its first licence in 1712, in the reign of Queen Anne. 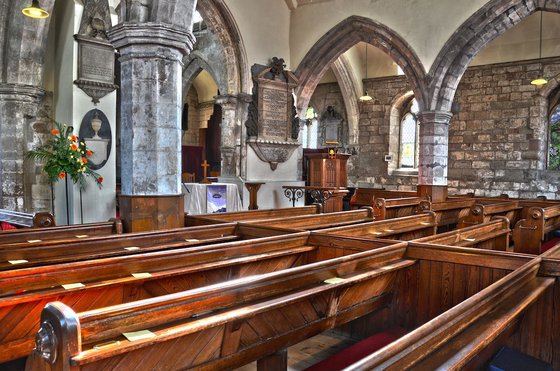 Continue to the High Street and the junction with St Andrews Street.

On the Corner of St Andrews Street you will see St Andrews Church. The outside looks squat, this is because subsidence made the tower dangerous and it had to be dismantled in 1928. The bells are stored neatly inside the church. The main part of the church dates from 1290 but there are some earlier fragments including the various carvings on the capitals of the arches, which support the tower. The chapel in the north-east corner is dedicated to St Richard and it is thought that pilgrims formerly viewed relics connected with him through a hole in the chapel.

Opposite the church is the town hall built in 1825. The ground floor would have originally been open and used for a weekly market, which would have spilled out into the square. It is thought that the square was the mediaeval centre of the town. 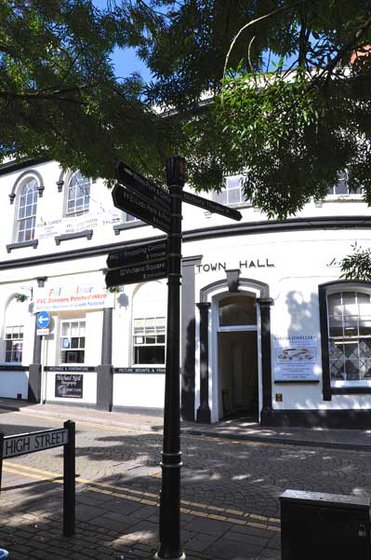 Walk along St Andrews Street back towards Victoria Square.

At the top of St Andrews Street stands the site of the Former Raven Hotel (the large black and white building on your left). The site of this building is reputed to be the birthplace of St Richard de Wyche. The old Manor House of Wyche, along with most of the town, was destroyed in the great fire of Droitwich in around 1290. It was rebuilt in the early 16th century and was known as St Andrews House. In 1879 it was bought by John Corbett and, after extensive remodelling, opened as a luxurious hotel in 1887.

Cross over the road to Victoria Square.

Opposite St Richards House is the town’s Library. This was formally the site of Salters Hall, built by John Corbett as a recreational facility for the town’s folk. In 1933 the current building was built as the ‘Salters Hall cinema’. The use of this building was changed into a library in the early 1960s, however inside the building remnants of its previous life as a cinema can still be seen, including the gallery and proscenium arch.

You have now reached the end of the walk.

If you are still feeling energetic a trip to the Sacred Heart Church to see the mosaics is a must.

Working Together To Promote Droitwich Spa...